MADRE partners and stakeholders in Tirana, a working group on consumers’ perception in agriculture 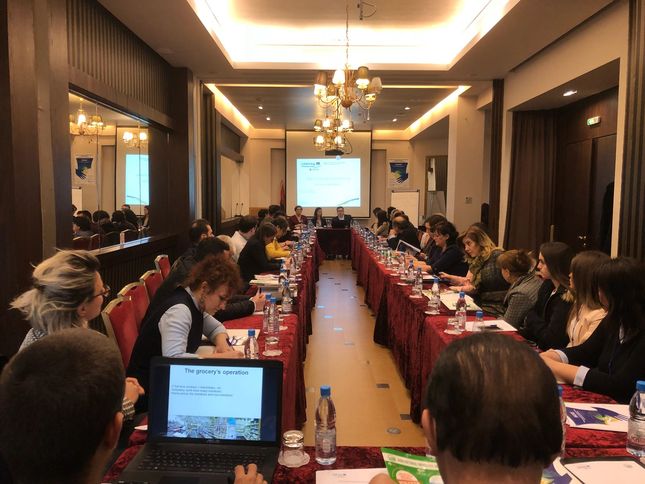 Partners and stakeholders of the European project on urban and peri-urban farming met in the Albanian capital for MADRE 6th Transnational Working Group, the last of the project.

The Agricultural University of Tirana – partner of MADRE, the project to foster the development of urban farming in the Mediterranean region co-financed by the Interreg MED Programme – hosted the 6th Transnational Working Group (TWG) on March 22nd and 23rd, during which the partners were able to talk about consumers’ innovation in the context of metropolitan agriculture

Many topics were discussed, all of which concerning the consumers’ point of view and experiences about urban farming and the short circuit market of fruit and vegetables

Using the world cafè methodology, the participants discussed key topics emerged from all metropolitan working groups: local food systems as alternative to conventional distribution, safety and traceability rules for local grown produces and caterings as a space to experiment with food coming from urban agriculture, thus influencing consumer perception on it.

The second day of TWG was dedicated to visiting some of Tirana best practices in metropolitan agriculture: firstly, the participants visited the urban initiatives in Skandenberg square (the main of the city), rich in aromatic and medicine plants and fruit trees, managed by the Municipality as part of the project called Tirana030 which aims to enlarge the green surfaces all over Tirana; MIA Organic, shop of organic products from local farmers, located in the centre of Tirana, which helped spreading the consumption of organic product-

Participants visited some urban gardens recently developed thanks to a law on balance between buildings and green space; these urban gardens are managed and shared by inhabitants of the buildings around them, who then consume the production.

Furthermore, partners and stakeholders went outside the city to visit Blerina farm and restaurant, owned by Blerina Bombaj Domje, which uses only local produced food to prepare meals. Study visits concluded with the Goat Farm Vorë, to discover the reality of local producers of cheese in the peri-urban area of Tirana.

Read and download the full press release through the link below.