METROPOLITAN AGRICULTURE AND FOOD SYSTEMS IN THE MEDITERRANEAN: MADRE LAUNCHED THE NETWORK 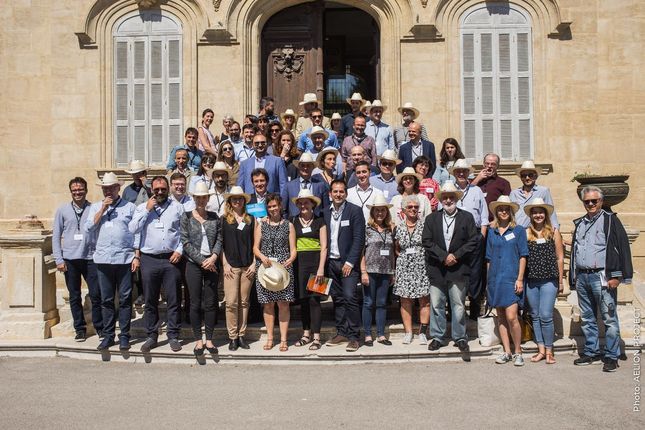 On June 1st in Villa Valmer, Marseille, partners, stakeholders and institutional representative met for the final conference of MADRE, the European project on urban and peri-urban farming.

On 1st June, MADRE partners and stakeholders gathered for the final event of the project in Villa Valmer (Marseille, France). The conference – Metropolitan agriculture and food systems in the Mediterranean – was the opportunity to present MADRE’s results to a wider audience.

MADRE has been introduced by Patrick Crézé, Development Director, and Manon Dieny, project coordinator, both of AViTeM. The Best Practice Catalogue, the Agri-Madre digital platform, the White Papers and the Policy Paper represent the key outputs of MADRE project. The signature of a Memorandum of Understanding for the creation of a Mediterranean network on metropolitan agriculture and food systems comprises the commitment to continue working together after the project’s end.

The Best Practice Catalogue and Agri-Madre online platform aim at mapping key stakeholders; consolidating the knowledge gained in the territories; evaluating the economic, environmental and social performance factors of urban and peri-urban agriculture; promoting the most relevant and innovative practices and networking opportunities. The White Papers and Policy Paper contain the analysis of the 6 innovation thematic areas linked with agriculture and identified within the project and policy recommendations to strengthen urban and peri-urban agriculture in public policies at a local and metropolitan level.

THE ROUNDTABLES: AN OCCASION TO MEET AND COOPERATE

The first roundtable – on the challenges and interests of the creation of a Mediterranean network on metropolitan agriculture and food systems – was moderated by Thierry Giordano, Decentralized Cooperation Advisor of FAO (UN Food and Agriculture Organization) – and was about the Mediterranean specificities and the solution to strengthen agriculture. Among the speakers were François Marcadé (coordinator of CIVAM PACA), Vicent Garcés (President of the The Mediterranean Citizens ́ Assembly Foundation (MCAF), social council of “World Capital of Sustainable Food 2017”, City of Valencia) and Davide Di Martino (Milan urban Food Policy Pact Secretariat).

The second roundtable involved cities and metropolises interested in the development of the Mediterranean network and was moderated by Xavier Tiana, Medcities Secretary General and Head of International relations of the Metropolitan Area of Barcelona. The speakers were deputy mayors and councillors from the 6 metropolitan areas involved.

Finally, the Deputy Mayors and stakeholders signed the Memorandum of Understanding for the creation of a Mediterranean Network on Metropolitan Agriculture and food systems.

BEYOND MADRE: A MEDITERRANEAN NETWORK ON URBAN FARMING

MADRE project represents a network of actors engaged in making agriculture a key driver for sustainable economic development and gives a structure to cities for their next agricultural and food policies.

The co-design of food and agriculture policies and the transition from a top-down to a bottom up approach strongly emerged, as well as the importance of linkages between rural and urban areas and food policy with social and economic policies.

The rising Mediterranean network on Metropolitan agriculture and food systems represents the commitment of public authorities, farmers, academia researchers and civil society organisations to work together for the promotion of urban and peri-urban agriculture initiatives and policies beyond MADRE project.

Read and download the full press relaease from the link below